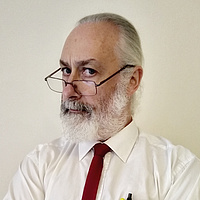 Dr David Doak is a videogame designer, scientist and lecturer.

He has made major contributions to some of the most critically acclaimed and globally successful console first-person shooters ever created. He is best known for his work on Goldeneye007, a game in which he famously made a cameo appearance as Dr Doak.

Born in Belfast, David grew up in Northern Ireland and later moved to England to study Biochemistry at Oxford - after obtaining his degree and DPhil he began his career as a research scientist and college lecturer.

However, his lifelong passion for videogames led him out of academia and in 1995 he went to work at the famous UK developer Rare.

At Rare, he initially provided IT support across the studio but then moved into mainstream development as a designer / programmer on the groundbreaking first person shooters GoldenEye 007 and Perfect Dark for the Nintendo 64.

At Free Radical, in the role of managing and creative director, he oversaw the development of the successful and beloved TimeSplitters trilogy of games, Second Sight and Haze. TimeSplitters is often acknowledged as a major influence on many of the popular online shooters of today.

David now lives in rural Norfolk and currently lectures at Norwich University of the Arts on the Games Art and Design course.

He has also recently developed a VR application for teaching structural biology which has led to the publication of his first scientific paper for 20 years.

As Dr Doak, he will also be making a cameo appearance in the upcoming film sequel to the mockumentary ‘Going For GoldenEye’ (2017).

David will be with us all weekend and will be chatting about video game development and the challenges of working with Brett Jones!