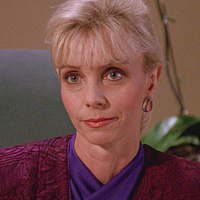 We are delighted to welcome to the Ball, Jennifer Edwards. She appeared in Star Trek: The Next Generation Episode “New Ground” as teacher Mrs Kyle.  Her film and Television credits are extensive starting with the lead role in Heidi in 1968. She appeared on the cover of Drama Logue Magazine in the ‘80’s as one of the busiest actors at the time. She has also written several screenplays, which have been optioned, and created a Disney Pilot “Justin Case”. She has just signed contracts to make her “horror” movie which she collaborated on. She also had her first novel “When Angels Cry” Published last year.   Jennifer will be with us chatting about growing up in Hollywood as a 4th generation film family. Her father is Pink Panther director Blake Edwards and her step mother is Julie Andrews. We can't wait to hear her stories.