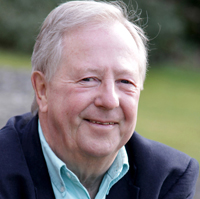 Tim was born in Buxton, Derbyshire, and studied Economics and Law degree at Cambridge University. In 1963, he became President of Footlights, the revue club in which he wrote and performed with Bill Oddie, Graeme Garden, John Cleese, Graham Chapman and Eric Idle. He toured extensively with the revue, Cambridge Circus, before moving into television. Tim's television credits include On The Braden Beat, The Frost Programme, At Last the 1948 Show, Me and My Girl and, of course, The Goodies. Tim has also enjoyed considerable success on the radio as part of the 60 series' of "I'm sorry I havent a Clue".  Tim will be joining us for the entire weekend and will be appearing as part of the Cabaret.

He says:
“One of the best bits of my working life has been the cast recordings of ‘I’m Sorry I’ll Read That Again’. We, the cast, had huge fun, and so did the audience. Watching Barnaby Eaton-Jones and his talented team in this revival, having just as much fun (and the audience, even more so), brought back very happy memories indeed. I am excited to be re-joining the show again for the Sci-Fi Ball!”